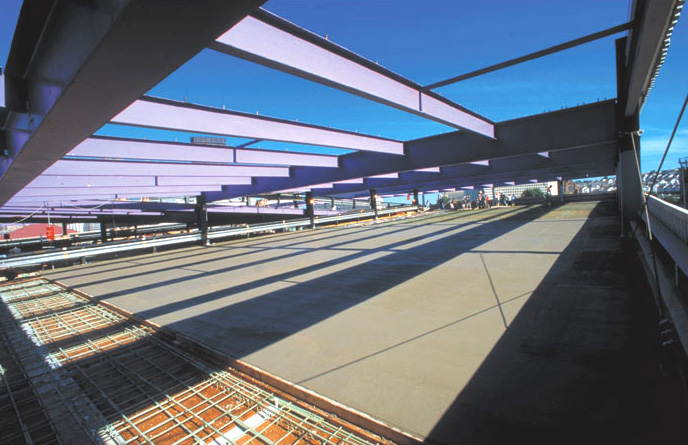 Twenty-five years of exposure to road salt, water and changing temperatures have taken their toll on the parking garage structure at the Mt. Sinai Hospital in New York City.

Graciano Corporation, the acknowledged leader in the care and restoration of buildings and structures, was selected to restore the 150,000 sq. ft. facility. Early structural evaluation exposed significant damage, including water and salt penetration and attack of the reinforcing steel rebar. It was also determined that rusting rebar had expanded, causing the concrete to crack and spall.

Graciano’s concrete repair craftsmen then repaired the remaining non-deck concrete which was cracked, spalled and broken. They installed new decking and reinforcements and replaced curbs. To weatherproof and seal the new garage surface, Graciano’s specialists applied an advanced urethane coating system and watertight sealants to make decks impervious to deterioration.

Traffic CoatingsTraffic coatings protect concrete surfaces from wear and tear caused by automobiles, machinery or pedestrian traffic. Most commonly formulated from an epoxy base, these coatings seal out moisture and damaging materials such as salts and oils. They are frequently impregnated with fine aggregates to improve traction and to minimize slipping hazards. Structural RepairsMost concrete structures are reinforced by reinforcement rods (“rebar”) or structural steel. If the concrete skin of the structure has been damaged or has deteriorated, it is frequently necessary to restore or replace the steel substructure. In cases where the building has been built with little steel in the structure, it is frequently necessary to employ and anchoring system to stabilize the building before repairs can be made. ShotcreteShotcrete is a material that combines concrete with compressed air. The mixture is pumped through a hose at high pressure, and is then applied to the desired surface. The force of the air pressure consolidates the material on the surface. Shotcrete can be formulated in one of two ways. The wet method premixes the concrete with water before it is pumped through the high–pressure hose. The dry method involves sucking the dry materials into the application system, combining them with water within the hose, and then apply them to the final surface. SealingSealing effectively closes the porous surface of concrete and makes it more impervious to damaging substances, such as gasoline, oils or melting agents. Sealants are available in clear formulations, for high visibility, high aesthetic areas, or in urethane formulations for high–traffic areas, such as parking decks or industrial floors. Polymer-Modified Mortar RepairsPolymer-modified mortar repairs involve the addition of plasticizers to traditional mortar. These additives improve the mechanical performance of the mortars by improving adhesion qualities, extending working times and improving hot weather workability. Polymer-modified mortars can also offer improved chemical resistance, higher flow, increased flexibility and better levels of compressive and tensile strength. Parking Deck RepairParking deck repairs frequently involve repairs to both the deck surface and to overhead concrete structures that may have been damaged by water infiltration or exposure to melting agents. Repairs can take the form of partial–depth repairs, where a damaged area is filled and sealed, or through–depth repairs, where concrete is removed through to the other side of the damaged surface and then replaced. Repairs may also be made to vertical surfaces clad in concrete or masonry materials, or to overhead surfaces, such as ceilings. Façade RepairsFaçade repairs involve removing damaged or degrading concrete from the surfaces of a structure, stabilizing the repair site, and filling any voids or cracks with new material that has been formulated to match the color and texture of the existing material that surrounds the repair. Façade repairs can also demand the creation of customized forms to allow for replication of cast–in–place detail. DemolitionDemolition entails the removal of damaged or undesired concrete. It is most frequently accomplished with a jackhammer or another piece of pneumatic equipment. Cementitious CoatingsCementitious coatings are generally comprised of Portland cement that has been combined with a vermiculite or perlite premix. These coatings are used to provide fire protection on steel or concrete surfaces, and are typically sprayed on while a structure is under construction. Balcony RepairsBalcony repairs typically involve structural stabilization and replacement of damaged or missing components. In many cases, due to water infiltration or damage from the environment, it is necessary to remove the facing surfaces and decking materials from a balcony, stabilize the steel framework that ties the structure to the building, and then replace the facing surfaces with new or recovered material.
← Georgian Court Bridge Staple Bend Tunnel →
Video 1